The Internet of Things is an infrastructure that enables services through the interconnection between things (physical and virtual), and it is provoking a revolution all around the world.

IoT is not just about connecting things such as vehicles and stations but to make data processing smarter and bring innumerable benefits to citizens and public management, whether in the area of transport, security, and energy efficiency, among others. An example would be an intelligent traffic light which identifies the flow of vehicles and pedestrians and from the data collected, optimize the controller operation.

But IoT has an important role not only in urban areas but also in the fields. Agritech is revolutionizing the agriculture in Brazil, increasing productivity and efficiency. The technology can provide reports so farmers will be able to make decisions about when and where to crop. The debate at swissnex Brazil adressed issues about IoT, smart cities, agritech and challenges such as legislation and connectivity.

Joseph Scott Kubes, OrbiWise SA – Head of Business Development & Sales, Americas, Australia & New Zealand
Scott has held the position of Head of Business Development & Sales for OrbiWise SA, a leader in IoT, LPWAN & LoRaWAN communications solutions, formally since April 2015. Scott has spent a lifetime working in the cellular and telecommunications industries and before OrbiWise headed up Operator Relations in the Americas for Ericsson’s Chipset Business Unit and predecessor ST-Ericsson, where he met his future OrbiWise colleagues. Earlier positions had Scott working with wireless operators, in defense communications and building mobile/cellular phones – so a broad exposure to many elements in the communications industry. Scott holds a BS and MS in Mechanical Engineering from North Carolina Statue University and MBA from Kennessaw State University.

Diogo Tolezano, Founder of Pluvi.on
Diogo is one of the founders of Pluvi.On, a company that uses IoT for reducing losses caused by climate events, such as storms, floods, and landslides. Prior, he was Director at Artemisia, a start-up’s accelerator for positive impact. He also founded a fair trade organic food delivery and a management consultancy. He is graduated in Industrial Engineering and post-graduated in Business Administration.

Fabricio Lira Figueiredo, Manager of Wireless Communications at CPQD
Fabricio Lira Figueiredo is currently Smart Agribusiness Manager at CPqD and the Leader of AgroTICS program with Usina São Martinho. He received his Ph.D. in Wireless Communications area from State University of Campinas (UNICAMP), in 2008, the M.Sc in Electrical Engineering from State University of Campinas (UNICAMP), in 1999, and graduated in Electronics Engineering at Federal University of Pernambuco (UFPE), in 1995. He worked at AsGa, in Brazil, from 1998 to 1999, and at Ericsson Wireless Unit, in San Diego-USA, from 2000 to 2001, and leaded the CDMA radio communication group in Ericsson do Brasil, in Brazil, from 2001 to 2002, when he joined CPqD as a researcher in telecommunications engineer. He is specialist in 4G and 5G networks, IoT connectivity, mesh networks, cognitive radio, machine learning, RF planning and optimization.

Flavio Maeda, president of the Brazilian Association of Internet of Things (ABINC). He holds a bachelor degree in Mechatronics Engineering from the Escola Politecnica of the University of Sao Paulo. As a serial entrepreneur, Flavio has been creating and developing new businesses in the IT and Internet industries since 2005. He is the founder of the IT Consulting Konitech and co-founder of the internet company Proprietario Direto. Flavio is also co-founder and first president of ABINC – The Brazilian IOT Association and Head of Digital Industrial Solutions of the North American company Chronos Business Consulting Inc. 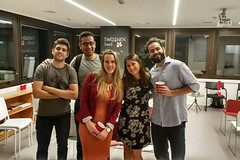